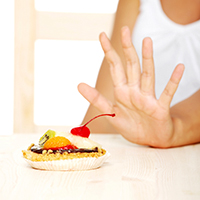 Bariatric weight loss surgery, including gastric sleeve, gastric bypass, and adjustable lap band surgery, is currently the top choice for treatment of obesity in America. About 80% of weight loss surgeries are considered successful. Despite their success, the exact mechanisms that contribute to these successes are not known.

Restriction and malabsorption are the most obvious pathways that contribute to weight loss after bariatric surgeries. By restricting the size of the stomach pouch, less food can be eaten at a time. Restriction is a method used in gastric bypass, gastric sleeve, and lap band surgery. Limiting the amount of absorption from the gastrointestinal tract, as is common in the gastric bypass procedure, also reduces the amount of calories absorbed by the body, which produces a weight loss effect. But, restriction and malabsorption alone may not contribute to the very impressive successes of the procedures.

Many post surgical patients report a change in the foods they are interested in eating after their sleeve gastrectomy, gastric band, or gastric bypass surgery. Scientists believe the bariatric surgery may be responsible for the changes in food choices, but have been previously unable to ascertain the causes.

A new study performed at Yale University School of Medicine may help shed some light on at least one reason for the change. Previous studies have shown that caloric intake is related, at least in part, to the dopamine reward system in the brain, which is sensitive to sugar in the gastrointestinal tract. Researchers at Yale performed an experiment with mice treated with a procedure similar to the Roux-en-Y gastric bypass surgery, which connects the stomach to a lower part of the gastrointestinal tract. By comparing these surgically altered mice with unaltered mice, they showed that the surgically altered mice paid less attention to the bottle of sugar water than the regular mice.

Based on these results, the Yale researchers theorized that by rerouting the gastrointestinal tract, they minimized the activation of sugar receptors in the duodenum, which in turn minimized the sugar-induced dopamine release in the brain, lessening the rewarding feelings from sugar. The researchers stated that they do not believe this link is the answer to how or why bariatric surgery works, and called for more research in the field.

If you or a loved one has a BMI over 35 and are experiencing achieving weight loss, please consult with Dr. Shillingford, M.D., P.A. to discuss your surgical options. Dr. Shillingford specializes in laparoscopic adjustable lap band, gastric sleeve, and gastric bypass procedures. His practice is located in Boca Raton, Florida and serves patients from all over the state including Miami, Fort Lauderdale, Davie, West Palm Beach, Orlando, Tampa, Jacksonville, Plantation, and Delray Beach. To schedule a free informational meeting with Dr. Shillingford, call (561) 483-8840.