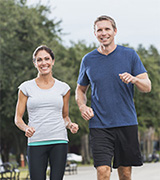 Good News: You’re probably burning more calories walking than you thought you were.

Have you ever wondered how devices like your activity monitor, watch, or exercise equipment predicted the calories you burned while exercising? Turns out they often use predictive equations developed by researchers to estimate the calories you burn while walking or exercising. Two leading standardized equations that predict calories burned while walking, known as the ACSM and Pandolf equations, were developed over 40 years ago for the American College of Sports Medicine and the military. Both equations were developed using a small number of adult males of average height, meaning they don’t account for size differences and assume that the equation is like a ‘one size fits all.’

A new study done at Southern Methodist University in Dallas investigated the accuracy of these leading equations. Researchers found that under level ground conditions, the equations predicted too few calories burned in 97% of cases tested. The research showed that while walking, bigger people burned fewer calories on a per pound basis. While they may burn more overall calories, the calories burned per pound was less than it was for smaller individuals. This led to routinely underestimating the calories burned while walking.

The new predictive equation developed by SMU accounts for the influence of body size and used a much larger sample size to help make the predictions more accurate. In fact, SMU’s new equation is four times more accurate for both adults and children, and about two to three times more accurate for adults only. The new equation is designed to accurately predict energy expenditure from walking regardless of the height, weight, or speed of the walker. More research is being done to predict energy expenditure while walking uphill, downhill, or carrying a load.

While the main purpose of SMU’s study is to help the military with decision-aid tools for their foot soldiers, it should come as good news for those who walk as a form of exercise. The walking you do may very well be better for you than you thought, at least in terms of burning calories. If you count the calories you burn while walking, chances are you are burning more than you’re being told you are. While there’s no telling whether this new equation will be widely used in common devices used to predict the energy expenditure of regular citizens, hopefully you can be motivated to walk a little more, or a little farther knowing you are burning more calories that you thought you were.

The above is offered by Dr. Shillingford, M.D., P.A, a board certified surgeon specializing in laparoscopic and bariatric surgery. Dr. Shillingford recommends exercise for all his gastric sleeve, gastric bypass, and lap band patients. Walking is a great form of exercise as it is usually free and generally well tolerated by most individuals. It can be a good choice for those who are seeking weight loss, as well as those looking for heart healthy activities. Walking can be done alone, or with a buddy. One of the advantages of walking is that you can converse while doing it, which isn’t possible with other forms of exercise such as running, cycling, swimming, or tennis. Talking while walking can be both a pleasant experience and it can make the time seem to go by quickly. For Dr. Shillingford’s gastric sleeve, gastric bypass, and adjustable lap band patients, walking for exercise is a great choice and may have just gotten better!