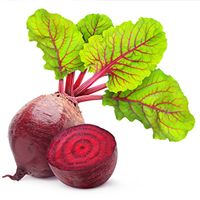 Beets are a vegetable with a long and colorful history. The predecessor the modern day beet is thought to have grown wild in Northern Africa in prehistoric times and spread to European and Asian seashores. It’s thought that initially people only ate the green leaves off the plant until the ancient Romans incorporated the roots as food. Tribes that invaded Rome contributed to the spread of the vegetable’s popularity throughout Northern Europe, where they were first used as animal fodder, then made their way into people’s diets as well, eventually becoming a staple in some cuisine, such as Russian borscht. In the 19th century, it was discovered that sugar could be made from beets and it’s popularity soared.

The round or oblong bulbous root of a beet can come in the classic dark red color, and also golden yellow, white, and rainbow. Out of the root grow dark green leaves which are also edible, nutrient rich, and can be prepared like swiss chard. Beets are generally available most of the year, but their peak season is from June to October.

As a general food rule, rich colors mean a rich source of nutrients, and beets are no exception. Their jewel toned color is a function of their pigments, called betalains, which offer anti-inflammatory, antioxidant, and detoxification support. They are also rich in folate, manganese, potassium, vitamin C, and fiber, along with a host of phytonutrients which contribute to the root vegetable’s most notable benefits of protection from heart disease, birth defects, and certain types of cancer, especially colon cancer.

Beets can be steamed, boiled, roasted, or eaten raw. Unfortunately, the phytonutrients can break down with cooking, so it is often recommended to cook beets with the peel intact, then remove the peel when the flesh is cooked and soft. Beet roots are very versatile in the cooking world. You can often find them in salads, dips, soups, as chips, in smoothies, paired with beef or sausage or cheese, pickled with eggs, and even in some desserts.

The above Food Highlight is offered by Dr. Shillingford, M.D., P.A., a board certified surgeon specializing in advanced laparoscopic and bariatric surgery. Dr. Shillingford’s gastric sleeve, lap band, and gastric bypass patients come to his Boca Raton office from both South Florida and Northern Florida, as well as Georgia, Texas, Ohio, New York, New Jersey, and Hawaii. His weight loss surgery patients are often looking to explore new and different foods, and while beets are anything but new, they can be incorporated into new dishes that fit nicely into a post bariatric surgery diet as they pack a lot of nutrition into 75 calories per cup.