Accessibility Tools
Hide
Home // Blog » Another Good Reason to Eat Whole Foods After Bariatric Surgery- Red Dye is Made From What???

Another Good Reason to Eat Whole Foods After Bariatric Surgery- Red Dye is Made From What???

Another Good Reason to Eat Whole Foods After Bariatric Surgery- Red Dye is Made From What???
Posted on: 11-May-2018 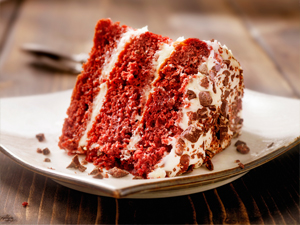 Cochineal insects, more specifically. They are little black and white crawly bugs that often eat the sap of the prickly pear cactus. These little insects have an interesting defense against predators: they produce a crimson-colored pigment called carminic acid. They store this bitter tasting acid in their guts, and only use it when they need defense.

People have known for centuries that when these bugs are crushed and mixed with water, they produce a beautiful red color. Long ago, Mixtec Indians in Mexico used to farm the cochineal insect and use the dye as a symbol of their social status. By the 1900’s Americans were using the dye from cochineal bugs to color sausage, shrimp, and even candy and other sweets.

There was a large controversy over this dye being used in a popular coffee drink, and while it’s no longer used in that coffee, you can still find the dye in yogurts, candy, and gelatins. Just look on the labels for carmine, carminic acid, or cochineal extract. It’s not harmful, unless you’re allergic.

Some argue that it’s a natural dye, as opposed to chemically created synthetic color. It’s a renewable source of red color. It’s been used for centuries. But then there’s the "ick factor."

If you just can’t get over the thought of eating ground up bugs for their color, then staying away from prepared and packaged foods is a great choice. For gastric sleeve, gastric bypass, and lap band patients, choosing whole foods over packaged foods is a better option for several reasons (and just just to avoid eating cochineal bugs). Whole foods are often lower in calories and carbohydrates than packaged and prepared foods. You know what you are eating and can control your protein, carbohydrate, and fat intake easier than with packaged foods. This helps you control your post bariatric surgery diet better, and can lead to more successful weight loss. If eating healthier and promoting weight loss are two benefits of trying to avoid eating bugs after gastric sleeve, gastric bypass, and gastric band surgery, that sound like a pretty good thing.